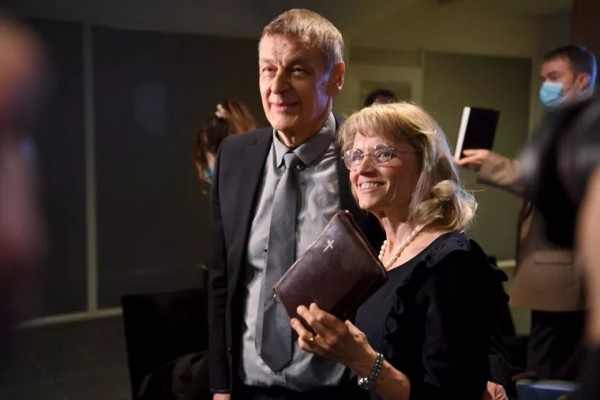 Päivi Räsänen holds a bible as she arrives with her husband, Niilo Rasanen, to attend a court session at the Helsinki District Court in Helsinki, Finland on January 24, 2022. | Antti Aimo-Koivisto/Lehtukuva/AFP via Getty Images

Finnish lawmaker Päivi Räsänen, prosecuted for voicing her traditional Christian beliefs about marriage and sexuality, believes that a "heavy hatred for Christian values" in Western society will cause many Christians to censor themselves for social acceptance.

The former interior minister who has served in Finnish Parliament for nearly three decades was one of several global political figures to speak at the annual International Religious Freedom Summit in Washington, D.C., this week.

The event aims to increase "the public awareness and political strength for the international religious freedom movement. The summit is led by former Ambassador-at-Large for International Religious Freedom Sam Brownback, who led similar events at the State Department headquarters during the Trump administration.

In March, Räsänen was cleared of hate speech charges for repeatedly asserting her belief that marriage should be between a man and a woman. But her legal battle continues as the prosecution has appealed the ruling to a higher court.

She spoke with The Christian Post ahead of her participation in a panel discussion at the summit focused on religious freedom in the Western Hemisphere Thursday.

As she faced a possibility of up to six years imprisonment, the 62-year-old politician attributed her prosecution to Finland becoming a "post-Christian world" where "Christian values are, in fact, a minority."

"The change has been so fast that it is difficult to understand what is happening," She said.

As the wife of a Lutheran pastor and former chair of Finnish Christian Democrats, Räsänen believes Christian values are "targeted" in criminal court as part of the "breaking of the virtue and the challenging of Christian values" that is now "very visible in our societies."

In Räsänen's case, she faced hate speech charges over a book she wrote 18 years ago titled Male and Female He Created Them: Homosexual relationships challenge the Christian concept of humanity and a 2019 tweet taking issue with the Finnish Lutheran Church's promotion of LGBT "pride month." She faced a third charge for comments she made on a radio show about homosexuality.

Bishop Juhana Pohjola of the Evangelical Lutheran Mission Diocese of Finland was charged with hate speech for publishing Räsänen's book.