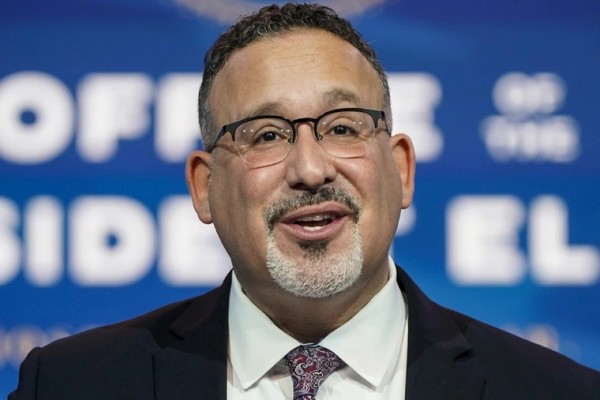 Miguel Cardona speaks after President-Elect Joe Biden announced him as his nominee for Education Secretary at the Queen theatre on December 23, 2020, in Wilmington, Delaware. | Joshua Roberts/Getty Images

A federal judge has temporarily blocked the Biden administration from enforcing new guidance expanding the definition of sex discrimination to include sexual orientation and gender identity, allowing 20 states to enforce policies requiring trans-identified athletes to compete in accordance with their biological sex.

Judge Charles Atchley of the U.S. District Court for the Eastern District of Tennessee issued an order in the case of The State of Tennessee v. United States Department of Education Friday.

The Trump appointee's ruling grants the request of 20 states to issue a preliminary injunction preventing the enforcement of guidelines drafted by federal government agencies as litigation continues.

The guidance in question expands the definition of discrimination based on sex to include sexual orientation and gender identity.

At issue in the lawsuit was a letter to educators announcing the expanded definition of sex discrimination under Title IX of the Education Amendments of 1972. An accompanying fact sheet provides examples of actions that the Department of Education would consider discrimination based on sexual orientation and gender identity. A technical assistance document compiled by the EEOC outlines "Protections Against Employment Discrimination Based on Sexual Orientation or Gender Identity."

The federal government cited the U.S. Supreme Court's 2020 decision in Bostock v. Clayton County as the justification for the new guidance.

In Bostock, the court ruled that firing an employee based on their sexual orientation and gender identity constitutes a form of sex discrimination in violation of Title VII of the Civil Rights Act of 1964. Atchley's ruling pushed back on the idea that Bostock also applies to Title IX, a provision initially designed to provide equal opportunities to women and girls in education, including sports.

"Both the Department and EEOC maintain that their respective guidance documents are required by the Bostock decision. However, defendants ignore the limited reach of Bostock," Atchley wrote. "The Bostock decision only addressed sex discrimination under Title VII; the Supreme Court expressly declined to 'prejudge' how its holding would apply to 'other federal or state laws that prohibit sex discrimination' such as Title IX."

"Similarly, the Supreme Court explicitly refused to decide whether 'sex-segregated bathrooms, locker rooms, and dress codes' violate Title VII," he added. "Bostock does not require Defendants' interpretations of Title VII and Title IX. Instead, Defendants fail to cabin themselves to Bostock's holding."

The judge determined that "Defendants' guidance documents are legislative rules and that the guidance is invalid because Defendants failed to comply with the required notice and comment procedures under the [Administrative Procedure Act]."

The judge indicated that the ruling only prevents federal officials from enforcing the guidance against the plaintiffs, meaning that it can continue to be enforced in the 30 states that were not part of the lawsuit.

"This preliminary injunction shall remain in effect pending the final resolution of this matter, or until further orders from this Court, the United States Court of Appeals for the Sixth Circuit, or the Supreme Court of the United States," he concluded.

Tennessee Attorney General Herbert H. Slatery III, a Republican, said in a statement that the judge "rightly recognized the federal government put Tennessee and other states in an impossible situation" by threatening to withhold federal funding if state laws are not altered.

"Keep in mind these new, transformative rules were made without you — without your elected leaders in Congress having a say, which is what the law requires," Slatery said. "We are thankful the Court put a stop to it, maintained the status quo as the lawsuit proceeds, and reminded the federal government it cannot direct its agencies to rewrite the law."

One example of an action classified by the Department of Education as discrimination based on sexual orientation and gender identity would be if a school principal stops a trans-identified male student on the way to the girls' restroom.

In this scenario, "the principal tells the student to use the boys' restroom or nurse's office because her school records identify her as 'male.'"

The fact sheet implies that the federal government would subject school districts to investigation if they required trans-identified students to use bathrooms that correspond with their biological sex and prevented trans-identified athletes from competing in sports teams that match their gender identity.

Critics maintain that such policies violate the privacy of biological females and put them at a disadvantage in competitive sports because of the physical differences between males and females that, on average, give biological males an unfair advantage over their biologically female counterparts.

The EEOC's technical assistance document explains that "the Commission has taken the position that employers may not deny an employee equal access to a bathroom, locker room, or shower that corresponds to the employee's gender identity."

Alliance Defending Freedom, a conservative legal nonprofit that opposes the administration's interpretation of Bostock and civil rights law, filed a motion to intervene in the lawsuit on behalf of three female athletes and an association of Christian schools.

"Girls involved in sports deserve the opportunity to compete on a safe and fair playing field against other female athletes. The court was right to find that the Biden administration exceeded its authority in issuing orders that jeopardize fair play," he said. "The Biden administration's radical push to redefine sex in federal law — and without the required public comment period — threatens to erase women's sports and eliminate the opportunities for women that Title IX was intended to protect."

Scruggs is grateful that "female athletes will be protected in 20 states while this lawsuit moves forward."