Monkeypox dilemma: How to warn gay men about risk without fueling hate

Monkeypox dilemma: How to warn gay men about risk without fueling hate 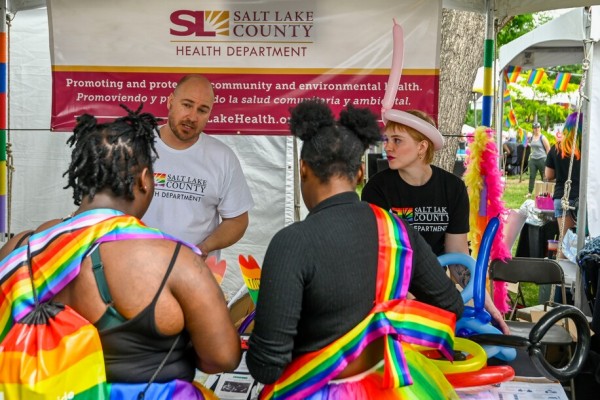 How to warn gay men about risk without fueling hate

Health officials in Salt Lake City distributed information at the Utah Pride Festival in June about monkeypox. During an ongoing outbreak, the viral disease has been concentrated among men who have sex with men. (Alex Goodlett for The Washington Post)
Monkeypox had arrived in Salt Lake County, with two men testing positive after returning from Europe, the epicenter of a global outbreak concentrated in gay and bisexual men.

Officials there faced a dilemma. They wanted to warn men who have sex with men that they were at higher risk for exposure to the virus. But they feared unintended consequences: heterosexual people assuming they’re not susceptible, closeted men in a heavily Mormon community avoiding care so they’re not seen as gay, and critics exploiting the infections to sow bigotry.

It’s not just Utah officials who are struggling to find the right message. As the United States confronts its largest-ever monkeypox outbreak, with nearly 50 probable cases, public health authorities navigate a delicate but familiar balancing act. In the 17 U.S. cases in which the sexual behavior of the patient is known, all but one involve men who have sex with men, mirroring trends in Europe. It’s something never recognized before in outbreaks of the virus.

In Salt Lake County, health officials consulted with advocacy groups and decided to get the message out to gay and bisexual men without making the message about them. At a booth during the Utah Pride Festival in Salt Lake City this month, Health Department staff distributed business-card-sized monkeypox warnings urging people to avoid close or sexual contact with anyone experiencing a rash or flu-like symptoms. The warning didn’t say anything about the gay community.

“We don’t need to put rainbows all over and make clear it’s only for [men who have sex with men] because it’s not,” said Nicholas Rupp, who oversees public outreach for the Salt Lake County Health Department. “The virus, of course, doesn’t see sexual orientation.

Officials nationally want gay and bisexual men to be alert for symptoms, particularly rashes and lesions on or near the genitals, as they travel, party and congregate in June for LGBT Pride month, which commemorates the 1969 Stonewall uprising in New York that marked a seminal moment in the fight for LGBT rights. But they also want to avoid creating a false impression that monkeypox is a gay disease.

The early days of the AIDS epidemic weigh on public health and LGBT advocates responding to monkeypox. Activists say public health officials failed to act with urgency as HIV decimated gay communities in the 1980s and gay men were blamed for the epidemic.

The strain of monkeypox driving the current outbreak is rarely deadly and causes an illness lasting several weeks, unlike AIDS, which is incurable and was often lethal before effective treatments emerged in the 1990s. But even if monkeypox does not pose a mortal threat akin to HIV, health officials don’t want to ignore any emerging disease threat disproportionately affecting gay men.

“It’s really important from the public health perspective for us to make sure that populations that may be more in harm’s way because of how this started are aware of the risk, as well as how to keep themselves healthy,” said Demetre Daskalakis, who leads the Centers for Disease Control and Prevention’s division of HIV/AIDS prevention and is involved in monkeypox outreach.