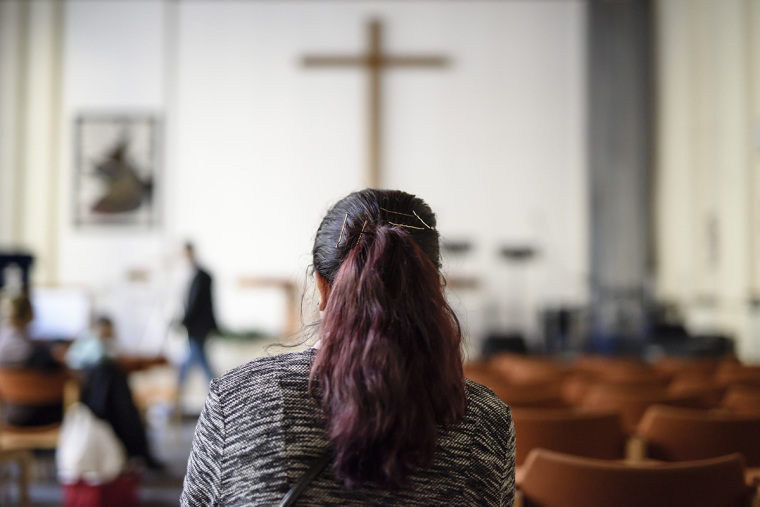 Afghan refugee Faridah visits a course preparing her to convert into Christian confession by baptism in Berlin, on October 23, 2016. | CLEMENS BILAN/AFP via Getty Images

“Credible reports” of ongoing violence committed against Afghanistan’s vulnerable religious communities, including executions and disappearances, suggest that Christians are at “heightened risk” of persecution with the Taliban in power, the U.S. Commission on International Religious Freedom has warned.

The USCIRF says in a “factsheet” that religious freedom conditions in Afghanistan are deteriorating since the Taliban took control of the country on Aug. 15, noting that it has “documented and received credible reports of violence including executions, disappearances, evictions, desecration of houses of worship, beatings, harassment, and threats of violence to members of particularly vulnerable religious communities.”

Afghan Christians, Ahmadi Muslims, Baha’is and nonbelievers cannot express their faiths or beliefs openly “because they face dire consequences, including death, if discovered by the Taliban,” the commission added.

The Taliban have gone door-to-door looking for Christian converts, U.S. allies, former government workers and human rights activists, USCIRF says, based on reports. “Christians have received threatening phone calls, while one leader of a house church network received a letter on August 12 from Taliban militants threatening him and his family. Some Christians have turned their phones off and moved to undisclosed locations.”

Afghanistan’s Ministry for the Propagation of Virtue and Prevention of Vice, which was reinstated by the Taliban in September, “uses a notoriously violent hardline Islamist policing system,” the factsheet says.

The commission explains that Afghanistan has no long-established Christian denominations and traditions.

Afghan Christians converted from Islam, and, therefore, all are considered “apostates,” according to Afghan law, which requires the courts to rely on Islamic jurisprudence. “Societal actors, the former Afghan government and the Taliban often view conversion as an attempt to flee Afghanistan by seeking refugee status as a member of a persecuted religious community.”

The factsheet adds, “Converts who already faced ostracization and the threat of honor killings by family and village members are now at heightened risk with the Taliban in power.”

The Afghan House Church Network and the U.S.-based persecution watchdog International Christian Concern estimate that there are 10,000 to 12,000 Christian converts throughout the country who have practiced underground over the last two decades.

“Afghanistan’s religious minorities and others who do not share the same religious beliefs as the Taliban are in danger of falling afoul of the Taliban’s hardline Islamist beliefs,” USCIRF warns. “While religious freedom conditions in the country were poor under the previous government, these conditions have already worsened and have become dire under the Taliban and are likely to continue to deteriorate.”

When the Taliban took control of much of Afghanistan following the drawing down of U.S. troops in August, many ministries working with the country’s underground church worked tirelessly to evacuate at-risk Christians, William Stark, ICC’s regional manager for South Asia, told The Christian Post earlier.

“Christians are now in hiding because of active threats against their community,” Stark said.

USCIRF recommends in the factsheet that the State Department grant U.S. Refugee Admissions Program access also to members of Afghan religious minorities “in recognition of the severe risk of persecution they face from the Taliban.”

In August, the Taliban executed 11 ex-defense personnel and two civilians, including a 17-year-old girl in Daykundi province, all of whom were from the ethnic Shia minority, Amnesty International said in a report, noting that the killings appeared to be war crimes.

Amnesty International’s Secretary General Agnès Callamard said the killings were “further proof that the Taliban are committing the same horrific abuses they were notorious for during their previous rule of Afghanistan.”

“They repeatedly violate the rights of those they perceive as their adversaries, even killing those who have already surrendered. The Taliban say they are not targeting former employees of the previous government, but these killings contradict such claims,” Callamard added.

The Taliban publicly declared in September that they would carry out executions and other brutal punishments, including amputations, under Islamic Sharia law as part of their rule in Afghanistan.

“Cutting off of hands is very necessary for security,” Mullah Nooruddin Turabi, a member of the Taliban’s interim government and chief enforcer of the group’s strict interpretation of Sharia law, told The Associated Press at the time.

“Everyone criticized us for the punishments in the stadium, but we have never said anything about their laws and their punishments,” he continued. “No one will tell us what our laws should be. We will follow Islam and we will make our laws on the Quran.”

Turabi, who is under U.N. sanctions, also said the new government was considering carrying out such punishments in public.

Following the withdrawal of U.S. troops in Afghanistan, the Taliban quickly seized control of much of the country, eventually taking the capital Kabul in August and forcing the government to flee.