The city of Somerville has broadened the definition of domestic partnership to include relationships between three or more adults, expanding access to health care. 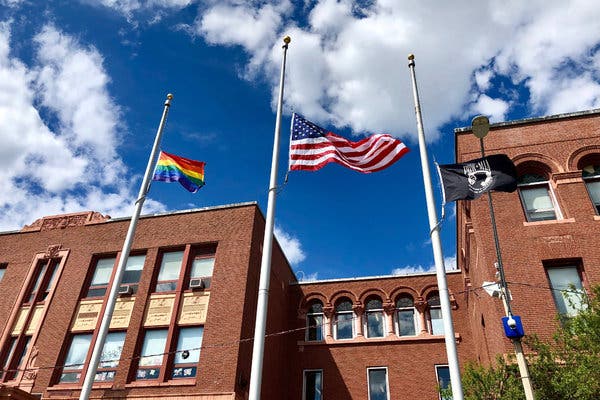 SOMERVILLE, Mass. — At the tail end of a City Council meeting last week, so quickly and quietly that you could have easily missed it, a left-leaning Massachusetts city expanded its notion of family to include people who are polyamorous, or maintaining consenting relationships with multiple partners.

Under its new domestic partnership ordinance, the city of Somerville now grants polyamorous groups the rights held by spouses in marriage, such as the right to confer health insurance benefits or make hospital visits.

J.T. Scott, a city councilor who supported the move, said he believed it was the first such municipal ordinance in the country.

“People have been living in families that include more than two adults forever,” Mr. Scott said. “Here in Somerville, families sometimes look like one man and one woman, but sometimes it looks like two people everyone on the block thinks are sisters because they’ve lived together forever, or sometimes it’s an aunt and an uncle, or an aunt and two uncles, raising two kids.”

He said he knew of at least two dozen polyamorous households in Somerville, which has a population of about 80,000.

“This is simply allowing that change, allowing people to say, ‘This is my partner and this is my other partner,’” he said. “It has a legal bearing, so when one of them is sick, they can both go to the hospital.”

Until last month, Somerville had no domestic partnership ordinance, unlike neighboring cities like Cambridge and Boston. It had become an urgent need with the spread of the coronavirus because residents found themselves unable to access their partners’ health insurance, said Matthew McLaughlin, the City Council’s president. He said expanding access to health care was his pressing concern.

As the Council prepared language for an ordinance last week, Mr. Scott raised the issue that it excluded Somerville’s polyamorous residents by specifying that domestic partnerships were “an entity formed by two persons.”

The councilor drafting the ordinance, Lance Davis, rewrote it to allow for multiple partners. It passed unanimously.

“I don’t think it’s the place of the government to tell people what is or is not a family,” Mr. Davis, who is a lawyer, said at a meeting last week. “Defining families is something that historically we’ve gotten quite wrong as a society, and we ought not to continue to try and undertake to do so.”

Under the new ordinance, city employees in polyamorous relationships would be able to extend health benefits to multiple partners. But it is not clear, Mr. Davis said, whether private employers will follow the city’s lead.

“Based on the conversations I’ve had,” he said, “the most important aspect is that the city is legally recognizing and validating people’s existence. That’s the first time this is happening.”

He said he had considered the possibility that a large number of people — say, 20 — would approach the city and ask to be registered as domestic partners.

“I say, well what if they do?” Mr. Davis said. “I see no reason to think that is more of an issue than two people.”

Nancy Polikoff, a professor at American University Washington College of Law and a widely published scholar of family law, said she was not aware of any other city that has extended such protections to polyamorous families.”