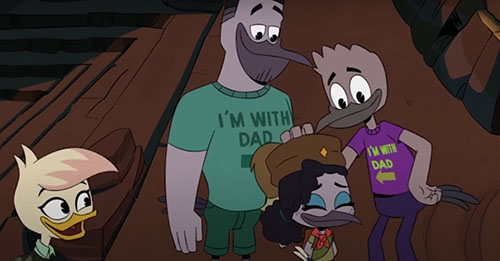 DuckTales is the latest Disney children’s series to insert LGBT characters into the plot.

The Disney XD series, currently in its third season, follows the adventures of Scrooge McDuck, his nephew Donald Duck and their triplet relatives Huey, Dewey, and Louie. (The trio are the nephews of Donald and the grand-nephews of Scrooge.)

In the Season 3 premiere, viewers learn that one of the characters – Violet Sabrewing – has two dads. The episode follows Violet and her friends as they learn if they have transitioned from the Scout-like “Junior Woodchuck” to “Senior Woodchuck.”

Parents are in attendance for the ceremony, and each of Violet’s fathers wears a T-shirt with the words “I’M WITH DAD” and an arrow pointing to the other. During one scene, one of Violet’s friends becomes excited about Violet’s Woodchuck success and shouts, “That’s my sister from a couple misters!”

Although neither father speaks during the episode, they stand on each side of her as she is named a Senior Woodchuck.

Disney series Andi Mack, The Lodge, Star vs. the Forces of Evil and Gravity Falls also have featured LGBT characters.

Still, DuckTales – with its ties to an iconic Disney character, Donald Duck – is another landmark in Disney’s goal of LGBT inclusion.

Frank Angones, co-executive producer of DuckTales, said the two dads “do not play a huge role in the story” – although he hopes that eventually changes.

“We’ve done pretty well on racial diversity and representation of people with limb differences, but we really have not done enough relevant LGBTQ+ rep,” Angones wrote in a Tumbler post. “We do have some themes and ideas coming up that address relevant LGBTQ+ narratives. But there’s always opportunity for a lot more; I don’t want a cop out and a cookie for saying ‘look at this one thing we did!’ I know this response is a bit of a bummer, but I didn’t want to lead anyone on. But please believe, as I’ve said before, I’m dedicated to being better and finding new opportunities for three-dimensional representation, on this show and the next and the next.”