Church of England: Sex outside of heterosexual marriage 'falls short of God’s purpose' 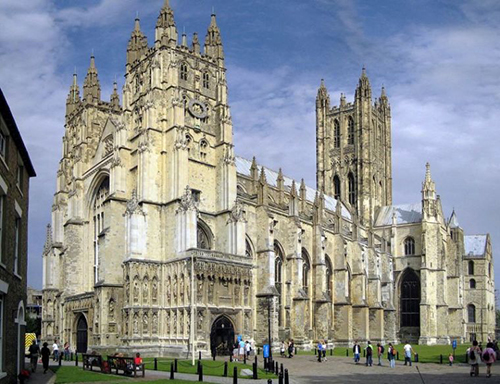 The Canterbury Cathedral is the seat of the Cathedral of the Anglican Archbishop of Canterbury,

the Primate of All England and religious leader of the Church of England.

The Church of England has released a guidance stating that sexual relations belong between married, heterosexual couples, and that sex in gay or straight civil partnerships “falls short of God’s purpose for human beings."

The House of Bishops of the Church of England issued pastoral guidance in response to the recent introduction to mixed-sex civil partnerships, which says: “For Christians, marriage – that is, the lifelong union between a man and a woman, contracted with the making of vows – remains the proper context for sexual activity.”

The church “seeks to uphold that standard” in its approach to civil partnerships, and “to affirm the value of committed, sexually abstinent friendships” within such partnerships.

“The introduction of same sex marriage, through the Marriage (Same Sex Couples) Act 2013, has not changed the church’s teaching on marriage or same sex relationships,” it says.

"Sexual relationships outside heterosexual marriage are regarded as falling short of God’s purpose for human beings.”

The Church of England explains that while “many of the provisions in the legislation on civil partnerships are, however, similar to, or identical with, those in marriage law,” the commitment in a civil partnership is different than that of a marriage.

“In particular, [civil partnerships are] not predicated on the intention to engage in a sexual relationship,” says the guidance.

“There is likely to be a range of circumstances in which people of the same sex or opposite sex choose to register a partnership, including somewhere there is no intention for the relationship to be expressed through sexual activity.”

Same-sex civil partnerships have been legal since 2005 and same-sex marriage was introduced in 2013.

The Rev. Malcolm Brown, the Church of England’s director of mission and public affairs, said, “Civil partnership is not the same as marriage, which is founded on the taking of solemn public vows and is recognized in the church’s teaching as the only proper context for sexual relationships,” The Telegraph reports.

“So, as with same-sex civil partnerships, there is no formal service or blessing but clergy will, as always, be encouraged to respond pastorally to couples wishing to formalize their relationship in this way.”

The move comes as the U.K. has changed its statute to allow heterosexual couples to enter into civil partnerships instead of marriages.

The change was mandated by the British Supreme Court in 2018 and took effect in late December. The new rule gives mixed-sex couples similar rights to those who are married, including inheritance, tax, and property entitlements.

On Facebook, Franklin Graham, son of evangelist Billy Graham, applauded the Church of England for its stance on sex and marriage.

“I appreciate the church taking this strong stand with the Word of God, which is truth,” he wrote.

The Church of England is part of the global Anglican Communion, which has long experienced division over theological issues, including gay marriage and ordination. Those rifts widened in 2003 when The Episcopal Church in the U.S. consecrated its first openly gay bishop, V. Gene Robinson of New Hampshire.

In recent years, a number of denominations have entered the debate over LGBT issues and how the church should approach them.

Last month, the United Methodist Church proposed a plan that would formally split the denomination after years of division over noncelibate LGBT clergy and same-sex marriage, with the formation of a new denomination for Methodists who hold to a biblical understanding of marriage and sexuality.

The Rev. Keith Boyette, president of the theologically conservative Wesleyan Covenant Association and one of the signatories of the Protocol, expressed his support for the measure.

“We can choose further conflict and uncertainty, or we can support a plan that frees us to be the church God desires,” wrote Boyette.